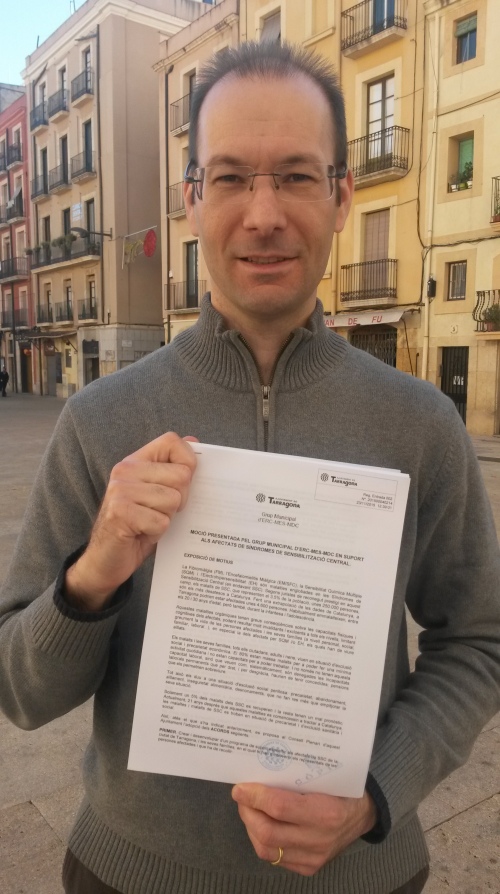 Our collaborator, Jordi Gene, with the voted motion in Tarragona

THE CITY OF TARRAGONA (CATALONIA, SPAIN) IS THE FIRST MUNICIPAL GOVERNMENT THAT IMPLEMENTS IT!

Sometimes we have good news.

Like some of you might know, most people with Central Sensitivity Syndromes (CSS) which include Myalgic Encephalomyelitis/Chronic Fatigue Syndrome (ME/CFS), Multiple Chemical Sensitivities (MCS), Fibromyalgia (FM) and Electrohypersensitivity (EHS), in Catalonia, have lost, in the past few years, their already limited access to their specialists in the public health care system. And also many are seeing their pensions and being taken away. This is leaving these 250.000 ill people in a situation of social exclusion.

The new plan (July 1st, 2015) that the Catalan Government has developed for people with CSS consists of leaving them parked in Primary Health Care (where doctors are not trained on these pathologies) and recommends as treatment Cognitive Behavioural Therapy and exercise. None of this helps (and can be harmful) to people with CSS who need relevant medical care and social and economic help.

For this reason, a few months ago, our association, the Liga SFC/SSC, began conversations with various Catalan municipal governments, because the situation of these 250.000 Catalans is so extreme that a Rescue Plan is needed.

The first municipal government that has stepped forward to implement this plan, is the City of Tarragona Municipal Government (Tarragona is a major city 100 kilometres south of Barcelona). In ghe plenary session held last November 30th, the “Institutional Declaration of support for people with Central Sensitivity Syndromes” was approved, which consists of a concrete programme of measures. This is a historical step.

In the past, many municipal governments in Catalonia have voted motions of “support and solidarity” with people with CSS. But they were not concrete plans with any helpful measures. We do not need words. We need action.

So we are very happy that all the political parties in the Tarragona City Government have voted this Plan which will come into action on July 1st, 2016. It is an important moment for people living with CSS.

We would like to thank our collaborator of the Liga SFC/SSC, Jordi Gene from Tarragona, for all the great work he has done of dialoguing with all the political parties. We would also like to thank all the Tarragona city counsellors of all the parties for their collaboration and for understanding that the urgent situation that are living people with CSS in Catalonia is not a party issue, but a human issue.

We encourage other municipal governments in Catalonia and Spain to implement this type of plan.

Below you can read the text that has been voted in Tarragona.

(For any comment, please write to LigaSSCSom250000@yahoo.es as this web does not allow comments for technical reasons. Also please write to us if in your city you are trying to implement a Rescue Plan for people living with CSS or ME).

Fibromyalgia (FM), Myalgic Encephalomyelitis (ME/CFS), Multiple Chemical Sensitivities (MCS) and Electrohypersensitivity (EHS) are organic illnesses under the category of Central Sensitivity Syndromes (CSS). According to legal experts specialized in these illnesses, the 3.5% of the Catalan population that live with CSS, about 250,000 people, are the group of patients most excluded from health care in Catalonia. Using that prevalence, in the City of Tarragona there are about 4,600 people who are affected. Normally these patients become ill between the ages of 20 and 30, but also during childhood and adolescence.

These organic illnesses have serious consequences on the physical and cognitive capacities of those who have them. They can be very disabling and exclude them at all levels, limiting in a serous manner the lives of those affected and their families (a the personal level, socially, family dynamics, work…), especially those with MCS and/or EHS, who have to live isolated.

These patients and their families, all of the citizens, adults and children, live in social exclusion and economic difficulties. 80% of them are too sick to be able to carry out minimal activities of daily living and are not able to work. Not only they cannot work, but also they see how their pensions and other economic help is denied to them systematically. The economic help to which they have a right to have to be able to survive.

All this puts them in a dangerous social exclusion: precariousness, abandonment, food insecurity, eviction from their home, which only make their situation worse.

Only about 5% of people with CSS get better and the rest have a bad prognosis. Right now, 21 years after these illnesses have begun to be known in Catalonia, those sick with CSS find themselves in the worst situation of precariousness and sanitary and social exclusion.

For all of the explained above, it is proposed that the City Council of this Municipality adopt the following AGREEMENTS:

FIRST. Create and develop a specific support programme for people with CSS and their families in the City of Tarragona, in which the representatives of those affected have to be involved and which will include:

SECOND. Establish that this programme and the actions that it entails have to be ready by June 30, 2016. This programme will be revised and updated annually by the staff of the Municipal Social Services Institute and the representatives of those affected.

THIRD. Communicate by writing to all associations that represent those with CSS, the implementation of this program, the bilateral communication channels to be used and how the execution of this programme will take place and the implication of those affected.

FIFTH. Urge the Generalitat of Catalonia and the Government of Spain to enable people with CSS to have access to real and relevant existing public health care and social services. And to elaborate information and education campaigns to help the population to know about these illnesses, and especially public workers in order to eliminate the stigma that now goes along with these illnesses.

SIXTH. Urge the Generalitat of Catalonia and the Government of Spain to recognize the work disabilities that people with CSS have and to give the benefits that are relevant in each case.

SEVENTH. Communicate this agreement and plan along with the solidarity of the Tarragona City Government to those with CSS and their associations.

EIGHTH. Communicate this agreement and plan to the Generalitat of Catalonia and to the Government of Spain.